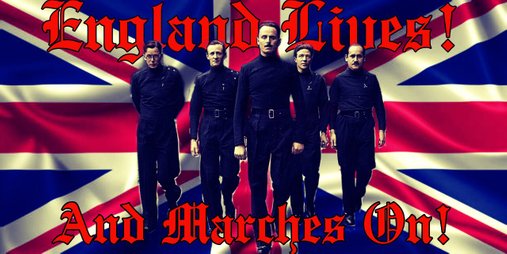 “You will not agree with us if you are content with things as they are. If you are willing to let this country just drift to disaster. But you will, at least, hear us with sympathy, if you are aware of the gravity of the national situation.” It has been well over 70 years since Sir Oswald Mosley spoke these words, but it is astonishing how relevant his rhetoric has become today.

We, as a nation, have lost our pride. We have lost our dignity. And we have lost our sense of self-preservation. Never in our history has the British population lacked spirit as it does now. The young people of our nation have lost all motivation to contribute to their country and pursue true happiness. Instead they engage in levels of hedonism that would bring the aristocrats of the Roman Empire to shame.

Where has the British heroism that built what was once a mighty force dissipated to? Why has the general populace cast aside the ways of old that kept us strong for so many years? The answer is simple. The British people lack strong, benevolent leadership. For many years past, Britain has been ruled by gluttonous politicians who seek only to drain this nations lifeforce for their own power and profit.

These parasites do not have our interests at heart. To them, we are simply a means to an end. They promise us change time and time again in exchange for ticks on sheets of paper that mean nothing. Because when all is said and done, when elections are lost and won, they know that they will never have to fulfil their promises. They know that all they swore to us will never come to be, except in the form of a chaotic “discussion” in the serpent’s pit at Westminster.

So why do we allow this to continue? Why are we allowing the parasite that is capitalist democracy to poison our people further? We see it, we know what will happen if we don’t take action now. When will the people of Britain say enough is enough? We will no longer be exploited by a system that sees us as no more than numbers on a stock market. We will not be replaced by a population that will destroy all our ancestors fought to uphold. And we will not allow our so-called leaders to continue their despicable treatment of the nation that nurtured them, only for them to spit in its face. When will the time come for the sleeping giant that is the British spirit to awake?

We decide that time is now. Which is why we propose a new machine. A new nation. A new union.